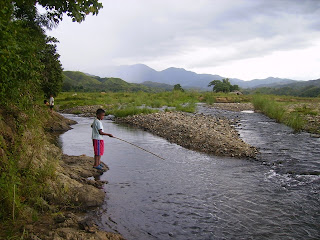 I recently developed a deep concern for rivers, particularly the small ones that technically others would call “streams” or “creeks.” In fact, sometime last year I tested how my fellow members in the Senior Foresters Google Group (srforester@googlegroups.com) would react to my observation that the Philippines has not been giving the attention that rivers deserved. “What good would healthy forests and watershed management be if the rivers that they feed with clean water would just be spoiled?” I asked.

I suggested that my alma mater, the UPLB College of Forestry and Natural Resources, would do well to give justice to the “Natural Resources” in its name by including rivers and lakes -- not only forests -- among its curricular, research, and development concerns. I also suggested that the DENR would probably be a sexier agency if it designated qualified personnel in its central and field offices to specifically look after the country’s rivers.

Apart from my well-received postings in the foresters’ e-group, I even articulated my emotions and aspirations for the country’s rivers in an essay that my friend Joey Austria (head of the DENR Special Concerns Office and National Vice President of the Society of Filipino Foresters) was so kind enough to include in the Souvenir Program that we labored to produce (1,000 copies) and distribute during the SFF National Convention and Forum held at the Dakak Resort in Dapitan City last November.

y concern for rivers had its roots in their having been part of my life as a child. Given the choice between school and river, I’d go for the latter then if it were only possible for kids then to go on living even without going to our reading, ‘riting and ‘rithmetic subjects.

The situation may be different with today’s over-accessorized but nature-starved children. But, as a boy, the rivers were my playground, day-care center and fast-food paradise all rolled into one. I encountered, tasted and got affected by more flora and fauna along the rivers than in the deep-blue mountain forests (said to be home then of the headhunting Ilongots) east of our barrio.

It was in the river that my cousins and I learned to identify edible flora, including my favorite ariwat and kitkitiwit (vines with edible fruits and young leaves). Woe to barrio kids then who could not distinguish the edible pako from the bitter ones, and who found ballaiba (balliba in Isinay, bulbulintik and tabtaba (bahase in Isinay), taratara and other river greens not up to their tastes!

During rainy season, we went to the river to comb their then still bushy banks not only for edible fern but also butinggan (wild button tomatoes; sometimes called butbutones in Ilocano), bamboo shoots (rabong in Ilocano; tumpup in Isinay; labong in Tagalog), edible fungi (kudet in Ilocano; urapping in Is.; tengang-daga in Tag.), tigi (imbayang in Is.; pongapong in Tag.; scientific name: Amorphophallus campanulatus), and mushroom (uong in Il; amabuvun in Is.; kabute in Tag.). In the dry season also when the rats or locusts would not leave us farm folk enough to harvest, we survived with karot (karut in Is.; nami in Tag.; kalot in Cebuano) that grew plenty by the riverside but were said to be poisonous if not sliced thinly then soaked in running river water before dried and cooked as rice substitute.

The rivers were where we ran to each time health personnel came to give us barrio folk vaccination. We also hid by the river when Tagalog-speaking guys came with huge sprayers on their backs to whitewash our huts with DDT. We were wary of such strangers because of the “stay home, don’t go out” tales our elders told us about kid-nappers (kumaw in Ilocano and Isinay; sipay in Laguna Tagalog; manunupot in Batangas Tagalog) out to catch naughty boys, put them inside sacks, cut their throats like what they do to chickens, and spill their blood to fortify a bridge being constructed somewhere downstream of the Magat River.

Armed with palsiit (slingshot; baris in Is.; tirador in Tag.), we frequented the rivers to try our Olympian skills at running barefoot (at times naked) after the wild ducks/mallards (papa in Ilocano; engah in Is.; papan in Tagalog and Bicol), and tukling in Il.; tikling in Tag.) that cavorted in the reedy portions.

The more intrepid among us would scour the deeper parts with pana (speargun) and santol-wood antiparra (goggles) to get to the bigger tilapia, mudfish (also called “snakehead fish: in the USA; dalag in Il.; dalaj in Is.; dalag in Tag.) and occasional eel (igat or  kiwet in Ilocano; dalit in Isinay and Bontoc; palos in Tagalog).

We boys in the barrio often went to the river to sharpen our bolos (usually badang or lilit which were often dulled by years upon years of use  and thus discarded by our elders). We spent some time to look for flat stones to use as our sharpening blocks (pagasaan in Il.; pampaliran in Is.; hasaan in Tag.). Later, we would test our skills in using the knives to gather a dead branch or two for firewood to bring home as sort of good deed for the day (so that our parents would not scold us somuch and would allow us to go gallivanting by the river again the next day).

Most of the time, however, we vented our bolo-wielding skills on the ferns, reeds, or whatever vegetation that unfortunately caught our cruel fancy. On some occasions, especially when the bush we call sapang in Isinay (karrarawit in Ilocano) start to fruit, we would go cut choice branches of the spiny bamboo (kawayan in Ilocano; lamuan in Isinay; kawayan-tinik in Tagalog) and make them into a toy-gun of sorts we call palsuot in Ilocano (kalido^do^ in Isinay; sumpak in Tagalog). The green fruits of the sapang were perfect “bullets” for our bamboo guns the absence of which would make us resort to young buds of the cotton tree (kapasanglay in Il.; apos in Is.; kapok in Tag.) or put a sheet of used Grade School pad paper on our mouth and chew it till it becomes malleable enough to insert in the hole of our bamboo toy-gun.

he rivers were also our all-season swimming pools and we just loved to go out on the day-after of floods (aggravated by the forest-clearing and migration induced upriver by two logging concessions) to look for newly created lipnok (deep part of the river) or pual (spot made deep by an uprooted bamboo clump) to swim on. We would use a stranded log or bamboo for diving board or sometimes whatever carabao happened to be laying nearby. That was how I learned to do the daplat (flat stomach) dive and how to swim the bara-bara (free style) and the langoy-aso (dog-style).

We would go back again and again to such swimming holes and do other games – like pinnautan (literally “endurance”) which involved staying submerged in the water and whoever comes out last would be the winner. Some other days we would go there to test another skill we river-loving kids are supposed to be master of: spearfishing.

The rivers were also testing grounds for how brave we were at crossing their rapids during the rainy season or going to fetch water at night and passed by trees full of fireflies (kulalanti in Ilocano; i^irung  in Isinay; alitaptap in Tagalog; aninipot in Bisaya). The rivers were also our clinics when we had circumcision (kugit in Il. and Is.; tuli in Tag.) and needed privacy when we boiled young guava leaves (uggot ti bayabas in Il.; utlo^ si bayawas in Is.; talbos ng bayabas in Tag.) to clean our penis wounds.

In summer, the river banks would become noisy with cicadas (riyari in Ilocano; duluriyaw in Isinay; kuliglig in Tagalog) and our excited voices as we joined our aunts to gather the edible pearly eggs and nymphs of the tailor ant (abuos in Il.; eha in Is.; kara-kara in Tag.). Of course, summer would be that part of the year when birds such as the bulbul (pirruka in Il.; pinuu^ in Is.; pulangga in Tag.) would be at their noisiest especially when a bugnay tree (buhnay in Isinay; bignay in Tag.).

On other sunny days when I could not sequester my cousins from their peanut-, palay- or tobacco-drying chores, I would go to the river alone to make mini rice fields and irrigation canals. Sometimes I combed the shallow parts or the so-called “oxbow lakes” (nangalisan in Ilocano) to look for stranded shrimps (lagdaw in Il.; ahdaw in Is.; sugpo in Tag.) that almost always became my instant “jumping salad” as they went straight to my mouth with their legs and tails still wriggling.

Quite often though, I went there to escape from farm chores and to play with the  tadpoles (bayyek  in Il.; tohong in Is.; butete in Tag.) or to catch red dragonflies (tuwwato in Il.;  atittino in Is.; tutubi  in Tag.; alindahaw  in Bisaya) to feed my pet martines. I would also scour the river debris to collect forest seeds of all shapes – some marble-like, some star-shaped, some almond-sized – that I contributed for extra points to my elementary science teacher’s classroom display.

When the first rains of April come, the riversides would again be busy at twilight as we would compete with other farm folk in I-iyo in catching May beetle (abal-abal in Il.; e-ve in Is.; salagubang in Tag.). We would use a beetle attractant we call keddeng which is simply the bark of the bitnong tree soaked in smelly mud for weeks and then airdried and wrapped in old cloth to keep its smell strong. Oh, it was pure delight seeing the insects fly one by one and later in pairs towards the keddeng that we stretched between two poles or sometimes just entwined on a stick or twig! As alternative, we sometimes applied a thick dose of pomade on our hair and it would be fun seeing the beetles go around you like little airplanes flown by drunk pilots!

We placed the unfortunate beetles in bamboo tubes (tubong in Isinay and Ilocano) with corn cob for stopper and, later, over flickering kerosene lamp (kingke in Ilocano, Isinay and Tagalog; sometimes tibanglos in Batangas Tagalog), we would count how many we were able to catch. And what did we do with the beetles? Well, we used them to whet our entomophagous appetites. My grandmother fried them with little lard, salt, garlic and tomato and – presto – we had a high-protein viand for supper and there would often be enough left for breakfast! Of course, I would keep a couple or more of the beetles to use as toys or to show off with playmates the morning after.

Oh well, those were the good old days, my friend! Even as I wish I could live my life with sylvan rivers all over again, I pity boys and girls of today who no longer get to experience the countless joys of life close to Mother Nature. — CHARLZ CASTRO