I’M CURRENTLY working on the production of the very first dictionary of the vanishing Isinay language of Nueva Vizcaya (particularly Aritao, Bambang and Dupax) and each time a new entry emerges from the caverns of my mind, almost always my memory comes alive with images, sounds, tastes, people, places, and events associated with the word. 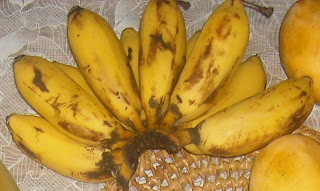 For instance, while I was thinking of the Isinay term for the Ilocano agpaluom (literally, "to make something ripe"), I thought of the bananas (and also the mangoes, anonas, jackfruits, and avocados) that we used to goad to ripe during those days when buying such was not yet in our household vocabulary.

Never mind that up to when I sat down to write this piece, I was not still contented with what I came up with, that is, “mampayutu” and “mampajinuj” – derived from “nayutu” and “najinuj” (which both means "ripe"). This is because, at least, the remembering brought back to life images of people who played big roles in my boyhood — like Inang (my maternal grandmother Feliza Pudiquet y Lacandazo), Apong (my maternal grandfather Pedro Pudiquet y Duldulao), Papa (Vicente Castro y Mambear), Juan Reyes (my favorite barber), Carlito and Carmelito Lacandazo (my deceased barrio playmates and uncle-cousins), and Bonifacio Campo (a muscular neighbor who Papa often relied on for carrying sacks of rice to the rice garanry that we called kamalig in Ilocano or e-yang in Isinay).

Yes, as a kid, I derived much nutrition from bananas. In my grandparents’ house in I-iyo, we used to have tumok, dippig, lakatan, gloria, immasukar, camarines and other such varieties that my indefatigable Apong and Inang raised in the lower part of their upland farm in Langka and some in their defunct and formerly kasoy-lined bangkag (rainfed farm; gitaw in Isinay) on the left side of the Palabotan Elementary School. I remember Inang had two large earthen jars (burnay in Ilocano; mawaga in Isinay) that she used as container to make the ripening of the bananas faster and even. Presumably bought from Ilocos and used earlier by Apong to brew sugarcane juice into basi (sugarcane wine flavored with fruits of the samak or binunga tree) when the dadapilan (carabao-powered sugar mill; pan-asotan in Isinay) owned by Uncle Berong Miranda was still operating, the burnay were perfect storage containers for bananas as they kept the heat well and they were impervious to rats. Inang would drop a couple of thumb-sized karburo (carbide) stones from Apong’s lampa (carbide-powered lamp used for fishing) and then cover the mouth of the burnay with banana leaves then keep the resulting lid in place by tying it with a strand of lapnit (dried bast fiber from the bark of the bitnong tree that is called tan-ag in Tagalog).

When I was still in the elementary grades at Gabaldon and even when I was at St. Mary’s High School, I would sneak into my grandparents house in I-iyo (we called it Surung then) each time I felt like going there. The bananas were a magnet to me that became easier to go to when Papa bought me a bulldog bicycle. Of course, I would bring home some for Mama and my sisters, but not after gorging on a whole sapad (bunch; sapar in Isinay) of the nutritious fruits that my doting grandmother allowed me to, even if the bananas were meant to be sold outside of Surung.

Lest you get the impression that we didn’t have bananas in the ili (poblacion or town center), particularly our house in Domang, let me tell that Papa and I spent countless hours of father-and-son bonding trying to grow some in the solar (fondly called Mangga by my sisters) when it was still arable enough for planting, among other crops, cowpeas (iris in Isinay, kardis in Ilocano), stringbeans (gayya^ in Isinay, utong in Ilocano, sitaw in Tagalog), mungbeans (betung in Isinay, balatong in Ilocano, munggo in Tagalog), eggplant (balaseno in Isinay, tarong in Ilocano, talong in Tagalog), and kamote (sweet potato). Papa’s favorite was the señorita (a banana variety that had small or bite-sitze and fit for kids and very sweet fruits). Uncle Ermin (Herminio Castro) also grew the same variety but also had gloria in his beautiful road-on-all-sides lot across our house, the one where the houses of Ellen and Ninfa now stand.

In Langka, we would know when bananas are ready to be harvested when the crow or raven (gayang in Isinay, uwak in Ilocano and Tagalog) hovered and made loud “kwak-kwak-kwak” among the banana groves. If Apong and Inang were busy in their other farms (such as in Palabutan and Arwat) or had their hands full with their tobacco leaves (aggatud and agtunus, no Isinay terms for these; I guess because Isinays didn't grow as much tobacco as the Ilocanos), the crows and the martines would beat them to the bananas.

Sometimes, the neighboring farmers would help themselves to the ripe ones but would later tell my grandparents about it in the spirit of being neighborly. Often we would have one or two bulig (bunil in Isinay; this is the whole set of fruits along with their “petiole” or “cob”) loaded in the kariton (carabao-powered cart) and we would bring these home to I-iyo. When I was around, it would be my chore, in addition to washing the dishes (manajpat in Isinay, aginnaw in Ilocano), to convert into sapad (bunch) the still green bananas. You could do this by using a sharp knife, but in my case my favorite was the tip of the panabas (huge knife or bolo) used for cleaning the ricefield dike (tambak in Ilocano; tamnang in Isinay) if not the barusok (iron-tipped dibble used for planting upland rice; called asad in Isinay).

Inang would next take over setting the bunches in the burnay (mawaga in Isinay) while I would dump the “cob” in the abandoned tupig pit converted into garbage pit. And then, depending on the time of the day, off to the river or the hills I would go, along with whoever friends in the village were around. A couple of days or so later, the bananas would start to ripen and, because my grandparents were so permissive to me then (which I observed was not the case with my cousins), I would be free to help myself with all the bananas I could stuff in my mouth.

IN THE HOUSE at Domang (I have to tell here that I had some kind of a "dual personality" then, living with my parents in the town on schooldays and staying in my grandparents' house in the barrio on weekends or during vacation from school), Mama and Papa had a different way of ripening bananas. Yes, correct, we did have some stands  in the solar and in the then backyard garden that we used to have in that spot where Mama’s house (also known as Tessie and Romy’s house) now stands.

I always took delight in doing the panagtebba of a banana "tree" (I’m a forester, so I have to be careful here). I forgot the Isinay and Tagalog terms for this activity, but it is simply involved the felling of a banana "plant" whose fruits are ready for harvest. The joy of doing the task simply stemmed from the fact that it would entitle me to whatever ripe fruits there would be in the whole bulig (all right, let’s use the term “bunch” for lack of proper English word). There would always at least be a couple or more of such ready-to-eat fruits in the bunch which I would share to any sister (at the time Baybee, Judith, Tessie, Arlyne, and the late Merlie) who would be around. But they would often not be around as it was either they were too busy with their girly plays or Mama scolded them if their dresses got stained with the banana’s fluid (stain is mansa in both Isinay and Ilocano, mantsa in Tagalog).

As always, I would also process the bananas into small bunches, taking care not to injure the fruits. Then Mama would bring out a carton box and place the banana bunches there and cover them with fresh madre cacao leaves before putting the box beside or atop the pile of firewood (itungu in Isinay, pagsungrod in Ilocano, panggatong in Tagalog) near the kitchen. By the way, the box we used to ripen the bananas usually was a discarded “pagikkan iti mureng” (place for putting soiled clothes) which originally was a grocery goods container box  from the Chinese merchant Co Peng in whose puwesto (stall) in the public market in Malasin my mama and I would regularly go to encash Papa’s tseke (paycheck; usually not more than 200 pesos, if my memory serves me right).

I have not yet told of my tales about the banana that could probably make it to Guinness' book of records for having the most number of seeds. We called such variety saba ti sunggo in Ilocano/Iluko and majanilan si araw in Isinay, which both mean either "monkey banana" or "banana suited for monkeys." But I have to park for now and save the other tales for separate postings later. -- CHARLZ CASTRO