You are here : Home / Dupax / Fish / Rivers / A Spearfisher Remembers

Used ballpens, broken umbrellas, freshwater rivers, and other recollections of a spearfisher

(NOTE: Like many of the essays I have written, this piece was triggered by what others would think to be a trivial thing or event – in this case disposing of used ballpens. What have ballpens have to do with spearfishing? Funny, indeed, but I did find a link and in fact was about to use “Of Ballpens and Spearfishing” as title for this piece that I started to compose morning of August 11, 2006 in my computer at the CBRMP office, 7th Floor, EDPC Building, Department of Finance, Bangko Sentral Complex, Roxas Blvd., Manila.)

To Discard or to Recycle

As I was rummaging through my drawer for a fine-tipped pen to use for my text-message “diary” one morning, I found two ballpoint pens that I thought already belonged to the trash basket. One was a Panda 757-RP whose ink-tube I transferred to an empty but more classy HBW 200. The other was a Dong-a My-Gel 0.5mm that has run out of ink.

What happened was, I got myself wrestling whether to throw the two fellows into my wastebasket or keep them longer, even if the latter would mean giving up again on my New Year, Birthday, and Holy Week resolution to clear my workplace of junk. I found it difficult, nay, painful to dispose of them. It was as if they were telling me someday somehow they would still be of good use somewhere.
And then it hit me: the items could be used to make spearfishing guns!

I shall outline shortly how this tool of my youth is made. But, for the uninitiated, let me start by saying that spearfishing guns look like mini rifles. For bullets, however, they use one- up to two-foot-long steel rods the tips of which are either sharpened like needle or shaped like a tiny arrow, and as a propelling mechanism they use elastic rubber bands the likes of those used to make slingshots.

Were I to construct a fish speargun today the housing of the crystal Panda ballpen could be a good barrel to guide the steel projectiles. The perfectly cylindrical and narrow ink-tube of the Dong-a would be best for rods fashioned out of the ribs of umbrellas.


Indeed, the most used barrel then were the stem of broken umbrellas. When I was young, the material was hard steel and it would take hours for one to cut them to desirable lengths by means of a file or old bolo.
I once used the metal ink-tube of a ballpoint pen – a Glorial. It worked well and made my arrow shoot straight. But then it easily got bent if used to probe stones. Besides, it was very rare to get hold of empty Glorial inktubes then. We used Bic, which was plastic.

In place of umbrella cylinder, one can use bamboo. There was this type that we called runo. It grew near mountain creeks and it was a favorite raw material too for making carillas or that tube used as spool for the thread used for weaving abel Iluko.

It was difficult to find broken umbrellas in the barrio; folks preferred using dalungdong or salakot for protection from the sun or rain. But in our house in the ili, we seemed to never run out of broken umbrellas. This was way long before roving repairmen came to our way-out-of-the-main-route town.

We used the ribs for arrow. Yes, sir, they were yet unalloyed unlike umbrellas of today where a gust of wind will make you a laughing stock when your umbrella does not only break but also gets reversed.

But the size of umbrella ribs was only fit for bunog and small buntiek. For arm-size dalag and other fish, particularly the igat, better to use thicker wire. We got this from the barbed wire used to keep stubborn cattle from getting out of the pasto. Surprising how such wires get steel hard after years of exposure to sun and rain int heir super stretched condition.

For rubber, we just bought this from the market in Malasin. One band was enough and it sold for only binting (25 centavos), later to salape (50 centavos).

If you could not afford it, ask around and there is always somebody in the barrio who has one interior tire that is not tuna or patingga (inelastic) but super elastic. This came, I guess, from the mechanics shop of the trucks of the logging company or sawmill.

Guava Twigs or Slabs from the Sawmill

For stock (the wooden part of the speargun that held the barrel and the lock), we used the choicest slab from the sawmill. Narra, guiho, dalingdingan, ipil. If you can’t go to the sawmill or have no access to slabs, best option would be guava branches, particularly the ones that curved into a pistol. By instinct, we never used caimito (brittle). We didn’t use tamarind either.

We used the sharpest bolo to carve the slab or the branch into the shape of a long-barreled pistol or that of a tiny rifle. Depending on the dryness of the wood, you either let this dry or hang this near the dalikan (stove) for hardening.

The next step would be to bore a hole through at the juncture between the handle and the barrel. The hole is meant for the kalbit (trigger) the fashioning, fitting and fastening of which completes the gun. The trigger is made out of wire that is pliant but sturdy enough to serve its pulling function. The wires I often used were from the extra end of mother’s clothesline, or the protruding ends of the fence that was normally used in Dupax before hollowblock fences became fashionable.

It may be blasphemous but I liken this aversion to disposing of ballpens that have seen better times to what Mother Theresa-like mortals do: rescue and take care of homeless or abandoned people, cats and dogs.
Perhaps it was the combined Ilocano frugality and environmentalist in me but I do have a cache of used ballpens that grows each time the ones supplied to me run out of ink or when I rescue and/or adopt ones that have been junked by officemates due to erratic ink flow, missing caps, broken clips, chewed top ends, and other such deformities.

Off to the River We Would Go

And what follows after one speargun gets finished? Of course, if it were made during school days, I would be looking forward to the weekend where either before twilight on Friday or before the morning sun gets too hot on Saturday I would grab my bicycle and off to my grandparents' house in I-iyo I would go. I would hide my bike inside the house (particularly when no one's at home), find a vacant pasiking among mg Apong Lakay's paraphernalia, rummage among the pots in Inang Baket's kitchen to find out if a boiled tugi or corn or banana  is ready for the taking, then off to the river that divided I-iyo and Ballasiw I would go. Some days I would be  lucky to get a catch (the likes of the bunch shown in the photo) and have juvenile mudfish, a lot of goby, a couple of frogs or so, and a half dozen small tilapia. Some days the tilapia are so wild or could not be found anywhere. Some days too the river gets murky due to bulldozing by some logger upstream. Some days I would have the company of my barrio friends/cousins Arthur and Duardo Guillermo, Tony Agcaoile, Milit Lacandazo, Cardo Jasmin, and Midsor Pudiquet. Oh well, like what one song by John Denver goes: "Some days are diamonds, some days are stones." 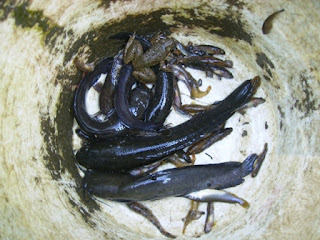