(NOTE: I just found this essay stashed in a blogsite that I could no longer write new posts to because I forgot my user's name and password to it and, no matter how I tried to retrieve them, I couldn't get through the service-provider's barricade. I'm re-posting it here with some modifications in the hope that its contents would still be relevant to the memory of former Dupax busybodies who, like me, certainly miss those bygone days of Lent.)

I just hope the people of Dupax still celebrate the Lenten season like they used to when I was still fully obedient of the Catholic doctrines taught us in catechism school.

The years (not to mention the semi-peripatetic nature of my professional life which made me live in places far from the old town, and which forced me to have long absences from my usual ways) have so blurred the images of those bygone Lents. I have thus lost track of the sequences and even many of the personalities of the events associated with those Lenten seasons past.

Nevertheless, back then, we know it was Lent when one Wednesday we would attend mass and come out later with black crosses on our foreheads. Weekday masses then were held only at 6 in the morning and, if it happened that Ash Wednesday was still school season, we self-conscious boys made sure we avoided touching our forehead when we washed our faces in plain pumpwell (we called the thing gripo or bomba then) water before going to school.

Then came Palm Sunday, which we referred to then as Domingo de Ramos. It was easy to know when it was that kind of Sunday because the Thursday and Friday that followed it was printed red in the red-and-blue calendar that carried the name of saints. It was that Sunday of the year when suddenly the palms in the neighborhood, particularly the buri palms (which we called tahtah in Isinay and silag in Ilocano) of Imong Calacala, became useful. Otherwise we would only notice the palms when we needed material with which to tie sacks of palay to be brought to Mercado’s ricemill (kiskisan), or when “District Schools exhibit” period came and we Dupax Central Elementary School pupils were tasked to produce broom from the fibers of the buri stalk.

Domingo de Ramos (Palm Sunday), as far as I recall, was also the only day apart from Christmas when I saw my grandmother Inang Feliza go to church. Before she went to the centuries-old (the belfry carries the year 1776) St. Vincent Catholic Church, however, she made it a point to first drop by the house to kiss my sisters, bring bananas or karabasa or utung or tugi or whatever their produce in the bangkag or their uma was, and give us our share of the palaspas (coconut frond handicraft?) that Apong Pedro made for the occasion. Apong used yellow coconut fronds then and his artistic pieces almost always had a pineapple-shaped body and figures of birds or grasshoppers on the tip of the midribs. After mass, Mama would put the palaspas on the door or in a corner near the kitchen – it was believed to be an-anib (talisman) against kimat (lightning).

The days that followed were marked with certain stillness. Even the wind stopped blowing. I guess even the birds that used to be noisy during other days of the year, also stopped chirping, cawing, and tweet-tweeting. But ah, the tamarind, the anonas, the mango, the lumboy, and the guava trees along with the sapang bushes had ripe fruits by then and their irresistible calls to self-taught tree-climbers like me were only rivaled by the seemingly increased population and tame nature of birds in the nearby groves.

Yet, as if on cue, normally boisterous, itchy-footed, and slingshot-happy kids like me stayed home then. Suddenly we were well behaved. Suddenly nobody climbed the fruiting trees in the neighborhood. Suddenly no one ran after the neighbor's cat that earlier chewed a pet martines bird sunning itself after a bath.

As if by miracle, too, we became useful in mending fences, splitting wood with axe (agbalsig in Ilocano; manisih in Isinay), guarding pre-harvest rice or palay let out to dry on mats on the roadside, watering wilting coffee saplings and eggplants, and baby-sitting (agaw-awir in Ilocano; mangahayam in Isinay) kid siblings. Oh well, that's penitencia as we knew it. You could almost hear the saraguelas trees (with their now leafless branches starting to go heavy with hundreds of marble-sized green and stony fruits) laugh and seemingly whisper gunggunam! (in Isinay: sanat naeyam! In Tagalog: buti nga sa iyo! In English: it suits you!).

Oh yes, even the Spanish-era church bells (the peeling of which provided our only time-piece then, usually at 7AM, 1PM, and 6PM) also became silent, starting Maundy Thursday (Huebes Santo), the whole of Black Friday (Biernes Santo) and up to Holy Saturday (Sabado de Gloria). Pity for those who die during such days when the bells are silent as they would not have the privilege of having their passing away announced by the then familiar mournful and seconds-apart peeling of the bells.

In place of the ringing of the bells on Good Friday, particularly when it would have to be announced that the libut (procession) was about to start or was already on its way around the town, was the tai-ta^ (palakapak in Ilocano; bamboo clapper in English). A dozen or so boys each with his own bamboo clapper would be perched on the topmost part of the torre (belfry) would make their bamboo instruments make sound with all their might.

The church sacristan mayor (at the time, it was Eligio Seangoy and then Eufracio "Parasyo^" Dinu) would prohibit us lesser boys to also go and grope our way on the very narrow and dark winding stairs up to the topmost level of the torre -- for our own safety then, I guess. And so, if ever we would get past him, one of the boys would be instructed to pull the shaky wooden ladder up to the top where there is a flimsy and also centuries-old brick railing. And we would just content ourselves peering through the huge bells to look at the "ant-sized" church-goers below.

Of course, I would join the procession -- as at the time I had this inclination to become a priest (a spinoff, I guess, of my having been a consistent First Honor in Religion from the elementary grades up to 4th year high school). From the St. Vincent Church, the libut first turned left towards Bagumbayan; turned left again at the back of the church; crossed the Bailey bridge across Abannatan at the northern edge of St. Mary's High; went straight to the Dereya part of Domang; turned left again past Castillo's kiskisan and the public market and on to our part of Domang (where Mama has already put out a tiny table where a couple of candles provide illumination to statues of Mary and San Vicente Ferrer); turned left again past the Nuestro, Salirungan and Mejia houses; then left again at the Magallanes part straight to the Pastor Perez, Cirilo Magaway, Jose Castro, Fernandez, Mercado ricemill and Guiab part; then right towards Dupaj passing by the Mamaoag, Castaneda and Guzman houses and then the historic Dampol Bridge. After Dampol, past the front of St. Mary's and the century-old acacia trees, the procession would hit the tip of the church grounds again but would turn right at what would pass for the widest road/boulevard/avenue in Dupax del Sur, past the side of the Dupax Town Hall and the Reyes, Arroyo, Lopez, Albano, Evaristo, Magalad, Felix and Galapon homes; turn left past the Bombongan, Sagario, Boada, Daran, and Dingras homes; then left again past the corner of the Ivilao Road and the Abijay, Guzman, Ramos, Vilde, Daran, Ferrer, Adducul homes; then left again to the Feliux and Galutera homes, then a slight right and left in front of the plaza; then back to the church.

All along the sturdy taita^ boys atop the belfry continued clapping their bamboo instruments and their plak-plak-plak choruses would compete with the solemn procession hymns played by the St. Vincent Orchestra on the front section of the procession and then towards the rear was the Eagle Swing Orchestra. Oh yes, that's how the Black Friday procession typically looked like then but with all the available and appropriate statues in the Church, including San Vicente Ferrer (the patron saint of Dupax) and the "Dead Nazarene" (my term, harking back to my boyhood when we avoided looking at the figure of Jesus lying in a glass-encased bed each time we would enter the church alone to to say a little prayer or just to genuflect).

The following day, Saturday, the uncircumcized among us would troop to Morgado, the town's only panday (blacksmith) at the time, to undergo the right of manhood (called kugit) in nearby Abannatan. The rest of us would join family picnics by the river (wangwang in Isinay), mostly in Iiyo, some at the Yeso, some at the Nazareno/Birayan area, and some further upstream, where we would sun ourselves all day catching goby (sappilan in Isinay; bunog in Ilocano) via our Isinay and Ilocano ways of catching river edibles such as the use of the batbateng, sarep, lipit, pi^yat, and tabukol.

Sunday would be Easter Sunday and -- alleluia!-- the church bells would ring happily and loudly again as if to say through their thick iron-bronze-copper immensities that, indeed, the Lord is risen. This time the "dead Jesus" (again, a name that I invented; see photo) would be pulled away to an inconspicuous corner of the church where it would gather dust and cobwebs until it gets noticed again when another Holy Week came. In its place would be a half-clothed statue of a standing and younger Christ, with its palms and side and feet still red with "wound".

I'm not sure now if the Risen Christ took the right or the left path as it was carried by devotees from the church. What I'm sure of was that the other path would be taken by a black-veiled statue of Mother Mary with its artificial long and curly tresses. And the two statues (along with their bearers) would meet under a square "corral" made of bamboo poles and decorated with colorful crepe paper and fern fronds (no flowers then nor even anahaw fronds in Dupax in April!) where, as climax of the ceremony, a girl seated on a laawe (I'll describe this later in another post) would be very slowly lowered down to Mother Mary while singing "Aaal...le...ee...luuuu...yaa!" to the tune of the church organ played by Juan Dinu (or was it another guy?) and/or the violin (which we called eng-eng) played expertly by Juan Felix.

Still singing with quivering but still sweet voice, the "angel" would next slowly remove Mother Mary's black veil and then the cantores (church singers) Juan Dinu, Juana Bastero, ___ Campo, et al. would sing some more Latin hymns appropriate for the Sabet (yes, that's how Papa used to call it). And then the two statues would be carried side by side back to the church as the orchestra (I guess the combined St. Vincent and Eagle) would play a happier procession music... and we kids jostled or outraced one another back inside the church and to our pews. All the while the church bells would ring "kaleng-kaleng-kaleng!" very loudly again.

Ah, Dupax... when its church bells still echoed in the hills and grass was still green and I climbed almost all the town's tamarinds! -- CHARLZ CASTRO 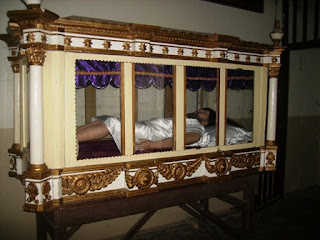