As a mestizo Ilocano-Isinay, I had the best of both Ilocano and Isinay worlds. During school days when I was young, I was in my parents' house in Domang, the western half of central Dupax; but on weekends and mostly during summer school breaks, you would find me in Ilocano country, particularly I-iyo (also known as Palobotan and Surung to some, and Daya to Isinay-speakers) upstream of the central part of the town.

It was in the latter world that I first got introduced to kitkitiwit and to discover the joys of eating it. I know it is an Iluko/Ilocano word and even up until recently I had been searching in vain for someone among the Isinays to tell me the name in Isinay. Anyway, my real story here is about my pleasant memories of the fruit that you can't see sold in the market and is now getting hard to find in the more populated or trampled upon parts of Dupax (such as the roadside in the photo where I used to get plenty of the wild vine fruits as a boy) and even in any parts of the Philippines... 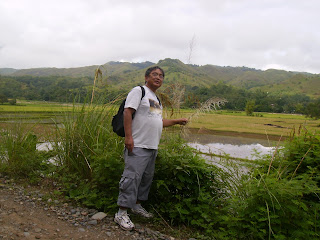 KITKITIWIT may sound funny to those who are encountering it for the first time, but for me this word is one of those that have powers to immediately bring back delightful memories of those days when, oh well, I knew of no other places in the world than Dupax. In fact, this 10-letter word’s unique if not poetic sound and print appeal make it a top candidate for inclusion in the title of a book I intend to write soon -- “Kitkitiwit and Other Memories of Boyhood When Dupax Was Still Headhunting Country.”

Indeed, my memoirs will not be complete if they don’t include an account of my love affair (if we may call it that) with this wild plant or rather its delicious fruits. Yes, the kitkitiwit is a crawling vine that grows by itself in sunny and undisturbed areas and whose yellow to orange fruits when ripe are as good to look at as they are for the eating.

Kitkitiwit has a very special part in my heart because it was the first wild fruit I ever got to eat. In fact, as a child, it was one of the earliest fruits I ever tasted aside from banana, lukban (pomelo), guava, anunas, tamarind, starapple, and mango that Dupax had plenty of. My earliest recollection was waking up in a blanket-hammock to a kallugong (Ilocano for wide-brimmed hat; called balanggut in Isinay) full of the luscious fruits – all for my own disposal – in a kalapaw (Isinay abung-abung) on a farm in Pallabutan after falling from a carabao that I rode for pleasure with my cousins/uncles Milit and Litok Lacandazo (both now on RIP country or what we alternately called then as sementerio and kampusanto).

I had no concept yet of Papa and Mama nor even my sister Arlyne at the time, so I must have been four years old then. But I did recall my grandmother, Inang Feliza, was giving “Inan-anuyo ta ubing!?! (What have you done to the kid!?!)”or some such scolding to a profusely apologetic and nervous Auntie Sillit Miranda, the mother of Milit and Litok. I would later learn because of that carabao ride, I got a bump on one of my eyebrows and fell asleep as a result. Anyway, the hatful of kitkitiwit fruits that my grandmother brought back from the bangkag where she was harvesting tobacco leaves did quite a magic because I soon forgot about my carabao falling accident. Imagine the scenery then – Milit and Litok were now hiding behind their mother’s skirt, feeling guilty for including me in their carabao fun-ride, and afraid of my grandmother’s including them in her scolding... while I was there savoring the heavenly delight of having a hatful of kitkitiwit fruits all for myself.

The kitkitiwit was again “medicine” that Inang (my mother’s mother) gave me one time I cried in pain and had to close my eyes for hours if not the large part of the day. Here’s why: probably part of my numerous self-propelled adventures in learning, I meddled with the sili (red pepper) that she spread on a biga-o (winnowing basket; lijawu {also spelled lihawu} in Isinay) to dry and I touched my eyes after that. I don’t know if the culprit was the super pungent chili (siling labuyo in Tagalog; lara in Isinay) or the equally hot elongated green pepper used to make artem (chili pickled usually in basi vinegar) or to flavor dinardaraan (dineya in Isinay, dinuguan in Tagalog) but I recall my eyes were burning then and I could not play tapok (dusty dry soil – my version of sand table then), gargarusa (sardine-can I filled with tapok as in a truck or fashioned like a bulldozer), daldalig (either with wheels of tibbeg (lavay in Isinay) fruits or sawn from round poles by Apong Pedro or Uncle Atong {both now in the "great barrio up there"}) or whatever it was that gave me company then as the only kid in the house of my grandparents in the barrio.

I don’t know where and how Inang quickly got the kitkitiwit fruits then. I guess now it must have been in the bangkag (vegetable farm) a stone’s throw away from the wooden bridge that spanned Iiyo’s banawang (NOTE: The last time I looked, the irrigation canal/stream was no longer there, and the antique wooden bridge has also vanished forever). She must have left me after applying a generous dose of lana (coconut oil; laro in Isinay) to my swollen eyes and set me up on a perch beside Apong Pedro’s tilapia pond with a long bamboo stick (part of a datar or split-bamboo flooring) at the end of which she tied a string with a banniit (fish hook; tering or bunnit in Isinay) baited with alumbayad (earthworm; kolang in Isinay).

I don’t recall if there are other materials we used to contain the kitkitiwit fruits, but my images always include the wide-brimmed hat we called balanggot. It was made either of buri palm (silag in Ilocano; tahtah in Isinay) or finer strands of the material used to make bay-ong, which later in college I came to know as pandan (we had no such plant in Dupax). Apong and almost all the farmfolks in the barrio always wore one either to the ricefields, to the bangkag, to the uma (swidden farm), or even when they agudong (go to town). Inang never failed to provide me one but which I seldom put on as protection from the tropical heat but rather used to hold a dying chick, a pet turtle, tukling eggs, and yes, kitkitiwit fruits. I include this item here because we had a pet monkey then, chained in such a way as to be able to run the length of a long horizontal bamboo pole, usually a bulo (uhaw in Isinay). Our monkey pet was quite tame and trained to look for kuto (human lice) in the hair of anybody who goes near it. Wearing a hat that Inang just bought from Malasin or Bambang, I went near the monkey to tease it with “kurus banias” or the like monkey language that we barrio kids learned from other kids. Without any warning, the monkey grabbed my hat, ran to the other end of the bamboo pole, and went on to examine my straw hat strand after strand, as in a hair. Of course, I cried and ran to Inang for help. But the Kurus Banias only let go off my precious hat after several long moments – already in shreds and only after finding no kuto among its strands. Now then, it’s your turn to guess what made me stop crying after that.

y fellow Ilocano forester friend and plant taxonomy consultant Nestor Baguinon of UPLB-CFNR says the kitkitiwit’s scientific name is Passiflora foetida and falls under family Passifloraceae. I guess he also mentioned its name in his native Cagayan but I’m not as sure now, just like I’m not sure if I heard somewhere that the Tagalogs call it karunggot, kamakamatisan or kenkendi. My writer-editor daughter Beia says her UP Baguio colleague mentioned the names karambong and susong-kalabaw.

Getting the cue from Avril de Guzman (see her comment below), I googled "Passiflora foetida" and got these English names for my childhood fruit: Running Pop, Passion Vine, Stinking Passion Flower, and Love-in-a-Mist. Here's a good close-up of  the plant's blossom:

Funny, but at the time I started to write this piece (at 56 years old) and until now that I post it here (I'm now 59) I have yet to be satisfied as to the kitkitiwit’s name in Isinay! Someone I asked said it is also called kitkitiwit, but he was not sure himself. Well, this might be an indication of my prevalent Ilocano upbringing even as my father was Isinay and that our house was surrounded by Isinay and my schoolmates and playmates were Isinay. I just hope this does not or did not mean that Isinay kids were or are not fond of eating kitkitiwit, or that the plant didn’t grow in that part of town dominated by the Isinay. It could be that I simply didn’t bother to inquire about how it is called in other languages, as indeed it was only in a trip to the island town of Socorro, Surigao del Norte, in 2005, that I came to know it is called kendi-kendi in that part of the country after I saw one growing in the amorseco-dominated grassy part of the island’s plateau and asked our middle-aged farmer guide how they called the plant. (Amorseco, by the way, is a grass that we had plenty of in the then grassy and wide grounds of the Dupax Elementary School as well as St. Mary's Dupax. Its "grains" stick on your pants when you trod on a field full of the grass which is called po-ot in Isinay and puriket in Ilocano.)

Looking back at another angle of the topic, I must have gotten my Vitamin Cs not only from eating plenty of guavas and mangoes but also by gorging on kitkitiwit each time I came across plants with ripe fruits during my  spearfishing cum fern-gathering and/or button-tomato-collecting days in the rivers of Iiyo and Mammayang. Of course, that was when kids grew up nurtured with food provided by Mother Nature  –  many, many years ago when Coke, Jollibee, MacDonald, Chow King, Pizza Hut, Chippy, Magnolia et al. have yet to drastically alter the eating habits, let alone the diet and the health, of Filipino children.

Next to kitkitiwit were other wild plants whose fruits we also found delightful when we were kids. One of them was sapang. Another was ariwat. There were arosip, kallautit, kaskastila, kaburaw, allagat, anunas, santol, bayyabas, pakak, bugnay, daldaligan, silag, and anaw. And then sarisay. All of these freely growing food-producing plants have their own separate stories and I hope to be able to write their share of the essays soon -- some in Isinay, some with a sprinkling of both Iluko and Isinay, or even Tagalog.

In the meantime, I just stumbled on the fact that probably no one in the Philippines has tried to domesticate kitkitiwit yet. Those of you who are green thumbs, here then is an idea worth experimenting: try growing kitkitiwit either as garden plant, for soil-erosion control, as vegetable and vitamin, etc. --CHARLZ CASTRO


P.S. Here are two more photos of the fruit that I recently got from the Internet: