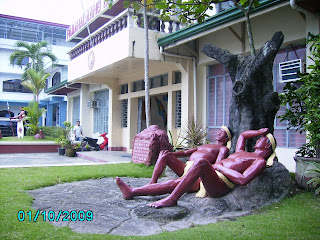 These figures depict how the early people of Dupax looked like when the Spaniards first came and asked what the name of the place was.

As in most language-challenged communication settings at the time, the natives thought the Caucasian visitors were asking what in the world they were doing  and so they answered “mandopdopaj” (“lying flat” -- due to sobrang kabusogan sa pagkain ng venison) and the Kastilas only picked up the word “dopaj” which they later recorded as Dupax.

The one with gayang (spear) and kalasag (shield) on the far left is the statue of Mandalito who was said to have led the fight against the Spanish conquerors, aided by Ilocanos who came to partake of the area’s rich hunting grounds.

Related to this image of the Ilongot-like (mainly on account of their G-strings or loin cloths) depiction of the first people of Dupax is a nagging question about the Ilongot and Isinay connection.

For those who wanted to ask but were either ashamed or didn't know how, let me do it for you: IS IT TRUE THAT THE ILONGOT (NOW CALLED BUGKALOT) WERE THE ANCESTORS/FOREFATHERS OF THE ISINAY?

ANSWER: EVEN IF THEY MAY HAVE LIVED IN THE ORIGINAL JUNGLE THAT DUPAX USED TO BE, THE ILONGOT ARE IN NO WAY RELATED BY BLOOD TO THE ISINAY.IN FACT, THE TWO TRIBES HAD BEEN AT WAR AT ONE POINT OF THEIR HISTORY.

THE CONTENTION IS BUTTRESSED BY THE FACT THAT THE ILONGOT AND THE ISINAY DO NOT HAVE SIMILARITIES IN THEIR LANGUAGES -- NOT ONE COMMON WORD.

It was Madam Lilia Castaneda-Magquilat, former Principal of St. Mary's High School - Dupax, who gave me the hint about this. Take note: only last December 27, 2010.

The occasion? When we went to take snacks at the Galutera house with Manang Mina Galutera (widow of the late-Mayor Romy Galutera) as host. This was immediately after the closing of the celebration (held at the newly covered plaza) of the First Anniversary of the "Bona^ Si Isinay" organization where Uwa Lilia is President.

Sangkanan diyoya^ siri? (How come I was there?) Well, I just happened to have been invited to be guest speaker during the Isinay org's celebration.

I promise to post parts of my speech -- my very first in the Dupax del Sur plaza! -- in this blogsite later when I get hold of the notebook where I jotted the points that I wanted to ivolejas (reveal). Mind you, the words, sentences, four-letter expressions, and even snippets of songs I used were 90 percent Isinay!

I will also try to post samplings of the Dupax Isinay words that are now slowly but happily accumulating in the Isinay-English Dictionary that I have embarked to do as my way of making up for my having been away from my hometown for a long time now.

By the way, as you can see on the date imprinted on the foto, I shot this almost exactly two years ago today as I post it here in this blog. For my abeveyoyan (townmates), abevoy (playmates), and/or fellow "loyalists" of Dupax who had not been to breathe the old town's mercifully/fortunately still unpolluted air, rest assured that these concrete statues are still there. -- CHARLZ CASTRO