What We Isinays Did With Election Flyers and Posters

We made kites, boats and airplanes out of candidates' flyers...
panties and carabao-saddles out of "vote for" banners
THE MID-TERM ELECTIONS we just had in the Philippines brought back memories of that time not so long ago when candidates did not yet rely too much on TV advertisements, the endorsement of celebrities, and, yes, vote-buying to win the posts they were aspiring for.

Back then, we the sovereign people of Dupax (and I guess even those in Aritao and Bambang and the rest of Nueva Vizcaya) welcomed election season (pambovotos in Isinay, panagbobotos in Ilocano) for reasons beyond their providing entertaining speeches and easy-to-sing campaign jingles, and a chance for eligible voters to vent their frustration and to get even with over-promising incumbent officials who failed to walk the talk they made in previous elections of giving additional school buildings and better roads and bridges.

I'm only realizing it now but, indeed, when I was young, one extra-curricular reason that made us kids of Aritao, Bambang, and Dupax happy each time elections come was the bonanza of paper and other such campaign materials that the candidates brought to our then somewhat paper-scarce localities.

To illustrate how we valued such items so much, I remember that a small eroplano hovered over our part of Dupax one afternoon and rained hundreds of leaflets that soon sent us mesmerized kids running after them and catching them even before they fell on the ground. I recall our neighbor Nana Ebeng stopped raking fallen starapple leaves and tried to collect the confetti with her rake. I think I also joined other kids to go as far as Pitang just to pick up those that dropped as far as where the Dupax National High School is now.

Yes, unlike today when many towns and cities consider as a big post-election problem the removal and disposal of the campaign karatulas (posters) and polyetos (leaflets) scattered any which way by the kandidatos, back then such campaign materials easily found multiple-uses even before the elections were over.

I'm not sure if Isinay kids today still know how to do them, but the following are just examples of  what we did with the flyers, leaflets, pamphlets, and sample ballots that we were able to grab each time a jeep with a blaring sound system goes around town and its occupants throw them pieces of paper the way we throw corn or rice to feed our chickens:


The extra supply of paper allowed us to try our hands at doing origami, the Japanese art of folding paper into toys or decorative pieces. My personal favorites along this line were paper airplanes, paper boats, and the flapping bird (see photo below). My father was an expert in making the paper bird, but I recall it was from my mother where I learned to make one. 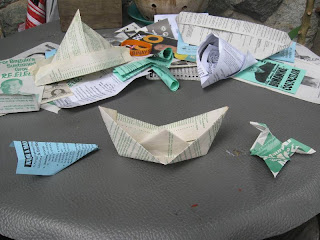 For the airplanes, we would experiment on making certain folds on their wings to stabilize their flight or to make them stay on the air longer. Additionally, we would tear tiny bits of paper, put them on the fold of the plane, then launch the loaded plane into the air to simulate the real airplane that dropped the flyers.

When the paper material is tough enough, some flyers would be made into stand-alone kites like the one below. We just attach a thread onto it, making sure that the Y-shaped format of the lead string is balanced or its forks are equidistant, and presto, we have a toy that would not hurt our feelings so much in case it gets tangled (misaot in Isinay, maisalat in  Ilocano) among the starapple and kapok trees that used to abound on our side of Dupax. 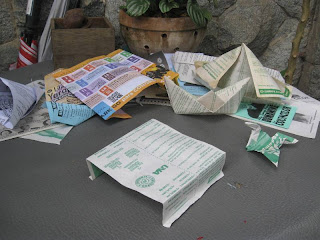 Since the flyers and pamphlets that used to be disseminated in Dupax were too small for the real kites, the ones that look like sting-ray (and using carefully polished -- inawwasan in Isinay, kinayasan in Ilocano -- bamboo sticks), the more kite-savvy among us kids would cut the flyers/pamphlets into appropriately narrow strips and paste them end-to-end to use as tail (iput in Isinay, ipus in Ilocano) of our kites. And, as in the stand-alone kite above, we would not get too angry in case such kite tails would be caught by smaller kids or chewed by excited dogs as it would be easy to make a replacement.

And what did we do with the extra materials, or when we got tired of playing with our planes, boats, birds, and kites?

We could always use them as kindling material (panungutung in Isinay, pagaron in Ilocano, pandingas in Tagalog) when it is time to light the earthen stove (dali-an in Isinay, dalikan in Ilocano), or when we need to burn the starapple leaves that our mother or sisters raked into a pile.

If not, they would come in handy as toilet paper (pan-ilu in Isinay, pagilo in Ilocano, pang-iwang in Tagalog) -- with the faces of the candidates still smiling on your behind!

OH YES, AS for the banners and posters, they were coveted campaign materials when I was little. In fact, regardless of the political party of the candidates they were calling attention to, we took pride having them nailed on the then still wooden front wall of our house in Domang.


They use tarpaulin nowadays for banners and posters. But back then it was white cotton cloth that after the election fever has died down became handy as doormats, cat or dog blankets, carabao saddles, and (you can ask my sisters about this) underwear for kids with, for instance, their "Vote Marcos / Lopez" red and blue markings still on them!

What We Isinays Did With Election Flyers and Posters
4/ 5
Oleh birizkiminh
May 15, 2013 Komentar