The Birds Are Singing Again
IN CASE YOU want to know what I get in return for my stepping into such virgin territory for foresters as language activism, here’s what I can say for now:
Each word find makes me and my interviewees/informants happy. This, because the resurfaced words almost always trigger stories, often long forgotten, in the memory of the senior Isinays, in particular those nearing their expiry dates, so to speak.
The words keep us connected not only as a people but also to the Isinays now long gone.
I’m particularly excited with the Isinay names and local uses, as well as the habitats, associated traditions, tales and folk beliefs, and status of flora and fauna. Nawala na yung iba, but it is still thrilling to listen to the elders wax romantic and sentimental over those good old days when there were still plenty of eyaw (kalaw), labban (hawk) and tariktik, and when laman (venison, deer meat) and karnen si bavuy si eyas (wild pork) were still common table fare in Isinay homes.
Rain or shine, conversations with the Isinay elders make them young, especially if you do it in a way that takes them out of their current predicaments such as arthritic legs, tubercular lungs, uncommunicative OFW children, or whatever worries or weakens them in the twilight of their years, and even their cobwebbed memories – and bring them back to their comfort zones when, say, they could still hike from town to the ricefield to mameyun (bring lunch to husband in the farm), manlipit (catch stone goby with bare fingers), mama-u (gather edible fern), mamasikul (collect bisukol), etc..
Thus, in a way, my word-collecting sessions and forays with them give me the feeling that no matter how light, no matter how brief, I was able to lift their spirits and give them something to break the monotony of their sunset years.
The Forest Factor
IF MY COLLEAGUES in the forestry profession would think my expanded interest as a forester would seduce me to divorce my forestry concerns and then move to the linguistics territory, I beg to disagree, your honor. You see, my word-hunting has opened not only welcoming doors to the hearts and homes of my townmates and fellow Isinays, but also new ideas for forest-related projects that I would plan to pursue once the dictionary has seen the light of day.
For example, a hearing-impaired Isinay farmer once showed me his guvas (woodlot) where a huge pagsahingin tree that we call antong in Isinay (anteng in Ilocano) has several wildlings. All along I thought the tree has gone extinct in Dupax — all felled and hauled down by carabao power to moneyed people who prefer the tree’s resinous wood  for fuel. My idea is to put up a small nursery for the propagation and raising of this species in my patch of land in the upstream part of town.
A concerned young Isinay, a priest and son of the late Forester Rogelio Felix of DENR Nueva Vizcaya, has suggested that to encourage school children to love  their Isinay language and culture, a summer camp in the former area of the Dupax Subsidiary Nursery may be effective. He believes that my being a forester would be very helpful, especially if we teach the kids basic biology, including identification of trees, birds, insects, leaf shapes and colors, etc. in Isinay.
I’m also thinking of hiring one of these days two farmer cum hunter Isinays to help me do an inventory of birds in the forest fragments and other wooded patches of Dupax. One is an expert not only on the Isinay and Ilocano names of birds, the other is an expert in where to find them, which season they would be found, and what trees/plants they feed on.
As for my partnership with other language activists, I would encourage the idea of extending their documentation and revitalization activities to other IP communities such as the Ilongots, formerly a forest-dwelling tribe feared in the 1950s-1960s for their headhunting practice in the wilderness areas in upstream Dupax.
So you see, I’m not leaving forestry. I’m only initializing a virgin territory that other “thinking outside the box” foresters may wish to explore sooner or later.
And while we're at it, I’d like to add that this growing problem of vanishing languages also opens new opportunities not only for linguistics-inclined forest researchers but also those who are at home with nursery, watershed, restoration, and biodiversity conservation work.
How and why? In my reading up on the language loss phenomenon, I found out that advocates of language revitalization can use as template what we do in forest protection, forest restoration, watershed rehabilitation, biodiversity conservation, and weeding out invasive alien species as technique for cleansing the endangered language’s vocabulary of alien words.
Other Trails to Take
ON A MORE personal level, my new passion has made me feel a better person than I used to be recently. Because of it, I’m not only now a forester but also a blogger, word hunter, and soon a dictionary maker.

In a little while, I shall also try my mettle in  using the internet as partner in furthering the Isinay cause, in coming out with a webpage, in writing books for teaching children to speak Isinay, in convincing others to help keep the Isinay alive.
It’s definitely a task full of challenges. But I love the word-hunting part and the way it makes my heart flutter. It refreshes my memories, makes me connect the dots and find the missing links in certain whys and wherefores pertaining to the culture, the economy, and the natural resources of Isinay country.
Early on, it has made me re-appreciate the wonders of morning walks, evening strolls, and long-distance hikes. It gave new reason for me to revisit my boyhood barrio, to talk with people I only had nodding acquaintances before, to renew my kinship with distant relatives and family friends, and to rejuvenate the recollections of Isinays much older than me.
Lastly (even as this one needs more contemplation) it makes me wish that all I got to do is live in Dupax again and have all the time to do the things that Isinays did when I was young -- and to share stories with the old folks all day and all night...
Yes, very much like what is depicted by the artwork below made for Isinay Bird by my fellow senior citizen and retired nature artist of the UPLB College of Forestry, Dante N. Pecson of Agno, Pangasinan. 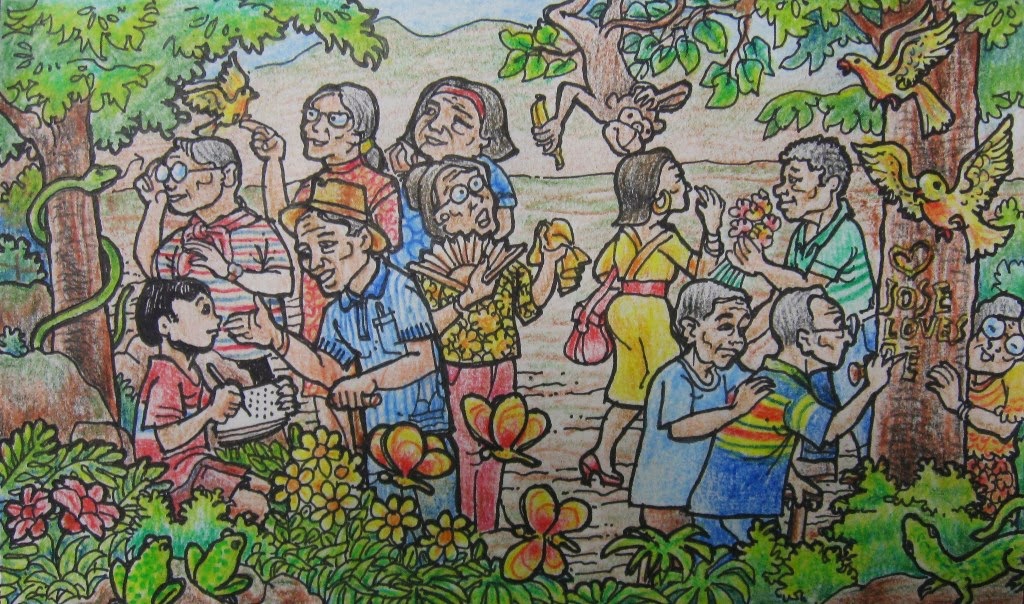