ONE REASON THAT made me write this piece on ariwat and, earlier, on the kallautit is the following note that was sent May 31, 2014 yet by a fellow senior now living in Canada but which I got to read only now. The note came as a comment to my Kitkitiwit Memories, one of the earliest posts I wrote for this blog. Here it is:

Charles, I was trying to google "ariwat" and came across your beautiful blog. I enjoyed reading it... it brought back childhood memories when my family lived in Binalonan, Pangasinan shortly after WW II.

I know most of the fruits you mentioned and understood the Iluko terminologies because I also speak Ilocano and Tagalog. Every time I am served the "imported gooseberries" as toppings, the first thing that comes to my mind is the "kitkitiwit" that we used to gather as kids.

Could you publish something about the ARIWAT (does it really cause an incision to your tongue?) and the KALLAUTIT? My mother used to tell me that when I was a very young child, I yearned for someone to gather kallautit for me when we went to visit our rice farm, because that was one of the fruits I ate early in my life. Sadly, I don't remember how it looks like, or its taste.

I am now 72 years old living in Niagara Falls, Canada. Thank you for a well-written blog. Please keep on writing. More power to you, Charles!

Well, umuna unay, Manong, Dios ti agngina iti suratyo. It is feedback like this that keep bloggers like me realize that at least some people are finding what we share worth reading. Wen, gapu kadagiti kakailian nga adda iti ballasiw taaw a kas kadakayo, agraman dagiti padak a mailiw iti biag "when grass was green and grain was yellow" (a kas kuna tay kanta a Try to Remember), itultuloyko ti agsurat.

I do have good memories of the ariwat as it has been part of my river-loving and carabao-riding boyhood.

The plant was a vine that used to abound in the then forested river banks of the then Sitio Iiyo (now Barangay Palabotan) of Dupax del Sur, Nueva Vizcaya, where I spent most of my early childhood.

Called du-u in Isinay, its fruits come in clusters and look like lanzones in size, shape, and the brownish color of their skin. Even the color of the fruit's juicy flesh resembles the translucent white of the lanzones.

One big difference however is that while the lanzones fruit is sweet when ripe, ariwat fruits are very sour. In fact, if your standard of sourness is the green tamarind or the kalamansi, believe me the ariwat is guaranteed to make you more "mukhasim" than the mascot of the sukang Paombong. 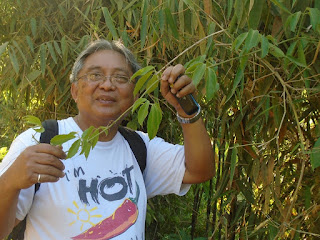 Yes, to answer the query of our friend by the Niagara Falls, the ariwat fruit is so acidic indeed that it does make the tongue split and bleed when you chew too many of the fruits even if they become a bit tolerable and somewhat sweet when fully ripe.

I recall having had my generous share of bleeding tongue and lips when the fruits were in season and my barrio playmates and I would include ariwat-eating among our river games, alongside peeling off blood-fattened leeches from the belly of our carabaos that we used as diving board.

In much the same manner that I have yet to find out if the ariwat also grows in Southern Luzon, the Visayas and Mindanao, I have yet to know the ariwat's scientific name. I'm sure it has great potentials for propagation as an ornamental plant. Similarly, I think the fruits have medicinal properties and have good prospects for pharmacological research.

Whether the ariwat fruit is oxalic or citric, I'm not sure. But I suspect that its acid content is too much for the tongue especially if you are a kid. That is probably why folks in my barrio also used ariwat as perres (Ilocano word for fruit used to give sour flavor to food) when they would convert freshly caught and still wriggling river shrimps (lagdaw in Ilocano, ahdaw in Isinay) into kilawen a lagdaw or "jumping salad".

Oh yes, I also remember we used both the fruits and the young leaves of the ariwat as seasoning when during family picnics by the river we would cook bunog, dalag, paltat, and ar-aro (respectively called sappilan, dalah, pattat, and alalu in Isinay) along with such fresh "veggies" as pako (pau in Isinay) and balangeg (kangkong in Isinay) that back then were still abundant in the riverbanks (teyantah in Isinay) of my town.

Because the riverbanks have lost their verdant vegetation due to the combined forces of floods, overgrazing, and conversion into ricefields, nowadays the ariwat has become a rare plant in my hometown. It has been half a century, in fact, since I last saw a full-grown specimen of the vine and tasted its fruit!